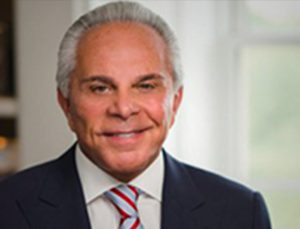 Joe Plumeri, a native of Trenton, New Jersey, has enjoyed a career in global businesses, community leadership and service on behalf of civic, philanthropic and charitable causes spanning six decades since he first walked into the Wall Street offices of Carter, Berlind, Weill in 1968 and asked for a job while a student at New York Law School. A renowned public speaker and authority on leadership, Mr. Plumeri is the author of the national bestselling book The Power of Being Yourself.

Today, Mr. Plumeri is Vice Chairman of the Board of Director of First Data Corporation, the world’s largest payments and business solutions company. He joined the company in 2013 after serving for 13 years as Chairman & CEO of Willis Group Holdings and, prior to that, more than 30 years in a variety of leadership roles at Citigroup and its predecessor companies. In addition to his role at First Data, Mr. Plumeri serves as a Senior Advisor to Kohlberg, Kravis Roberts & Co. L.P. (KKR).

As CEO of Citibank North America, Mr. Plumeri led the integration of the consumer businesses at Citicorp and Travelers Group. He also served as chairman and CEO of Travelers Primerica Financial Services, vice chairman of the Travelers Group, and president and managing partner of Shearson Lehman Brothers. While Mr. Plumeri was the president and managing partner of Shearson Lehman Brothers he was responsible for oversight of the merger with Smith Barney. Known for his stem-winding motivational performances in front of thousands of national Primerica representatives, Mr. Plumeri’s leadership of Primerica’s 200,000 agents during its crucial rebuilding years in the 1990’s positioned it for a successful spinoff as a public company, culminating in a 2009 IPO.

Mr. Plumeri has a long history of support of academia and educational institutions. As a benefactor of The College of William & Mary (W&M), his alma mater, Mr. Plumeri committed $2 million to establish the PlumeriAwards for Faculty Excellence at W&M, funded the Joseph J. PlumeriBusiness Scholarship, helped to build Plumeri Park, the 1000-seat home of the William & Mary Tribe baseball team, and created the Joseph J. PlumeriEndowment Fund for baseball scholarships for the school, in addition to other generous support for the college.  Mr. Plumeri also contributed $1 million to the College of St. Rose in Albany, New York, for the development of the school’s new Christian Plumeri Sports Complex named in honor of his deceased son.  Mr. Plumeri is an owner of the Trenton Thunder, the AA-affiliate of the New York Yankees.  The stadium, completed in 1994 and originally named the Samuel J. Plumeri, Sr. Field, now known as Arm & Hammer Park. The arrival of the team the construction of the new stadium helped revitalize the waterfront area of Trenton. The Thunder has consistently ranked among the best managed team attracting the highest annual attendance in Minor League Baseball.

In 2015 Mr. Plumeri published his first book, a national best seller, The Power of Being Yourself: A Game Plan for Success – by Putting Passion into Your Life and Work. In his book, based on his life experiences, Plumeri offers simple yet profound guidance on how to stay positive, motivate yourself and others and, achieve success in your life and work.

After graduating from W&M, Mr. Plumeri completed service in the U.S. Army in 1974 and began a career in teaching and coaching football before enrolling in New York Law School and beginning his business career. Over the years, Mr. Plumeri has been welcomed back to academic institutions to receive doctorate degrees and serve as commencement speaker. Mr. Plumeri was named to Treasury & Risk magazine’s list of “100 Most Influential People in Finance” in 2009 and 2010. He was also recognized by St. John’s University School of Risk Management as Insurance Leader of the Year in 2006.